| About the Clan |
Breezeclan is a very talkative clan. The cats don't like to fight, and they'd rather use words. Most of the cats in this clan are natural born sprinters. They train themselves to run by chasing the wind, or rabbits. They are also very good climbers too. Even though they can run, they can still climb a tree and hide from predators. Most cats are not afraid of public speaking and seem like they are natural speakers.

| Traditions |
Racing- When kits are made into apprentices, they always have a race around the clan camp. Apprentices are usually appointed in groups of 3-5 so the race is bigger, but if only 1-2 apprentices are appointed, they are still required to run the lap amount around the camp.The apprentices don't really win anything unless their mentors take them out for something special, and the race is usually just for fun and to test the speed of the cats.
Starpool- When apprentices are appointed, they take a trip with their new mentors up to starpeak to talk to starclan. Starpeak is a mountainous area in the middle of the island, and inside is a small pool. The cats are required to stick their front paws into the pool and hang their heads low to talk to starclan. They will soon fall into a deep slumber, and find starclan. Maybe even talk to one of the deceased cats if they are lucky.

| Reputation / Beliefs |
Breezeclan is a Starclan believer. Some cats may not believe in Starclan, but most of Breezeclan does. The cats believe that when you die, you either go to starclan, or go to the dark forest. There is no in between. All of the ancestors are to be in starclan, or so what the cats believe. From the clans or not, they believe they are all there, and waiting for them to come to starclan.

But with a starclan, you must have a dark forest. Yes, some cats are bad, but others, are evil. Born to fight and hungry for blood and revenge. These cats will, in fact, go to the dark forest. These are the cats that Breezeclan believes are the power hungry cats, who dreamed of being leader of a powerful, blood thirsty clan from their birth. Breezeclan cats often tell stories of the most famous Dark Forest cats, like Tigerstar, Mapleshade, and Thistleclaw.


| Clan Holidays |
Camping Trip- Usually, when a group of 3 or more apprentices are at the age of 10-12 moons, their mentors take them on a special camping trip. The trip usually lasts 2-3 days, and is set in the forest. The mentors task is to try and scare the apprentices with ghost stories around a bottle of lightning bugs. The apprentices are appointed to find a twoleg bottle or jar, and catch lightning bugs and fill up the jar. Once that is done, they all gather around and tell stories. After that night, they spend a day or two giving the apprentices a tour around wherever they are camping. It isn't a required trip, but has always been a fun tradition made by the first Breezeclan warriors, who had come from being kittypets. 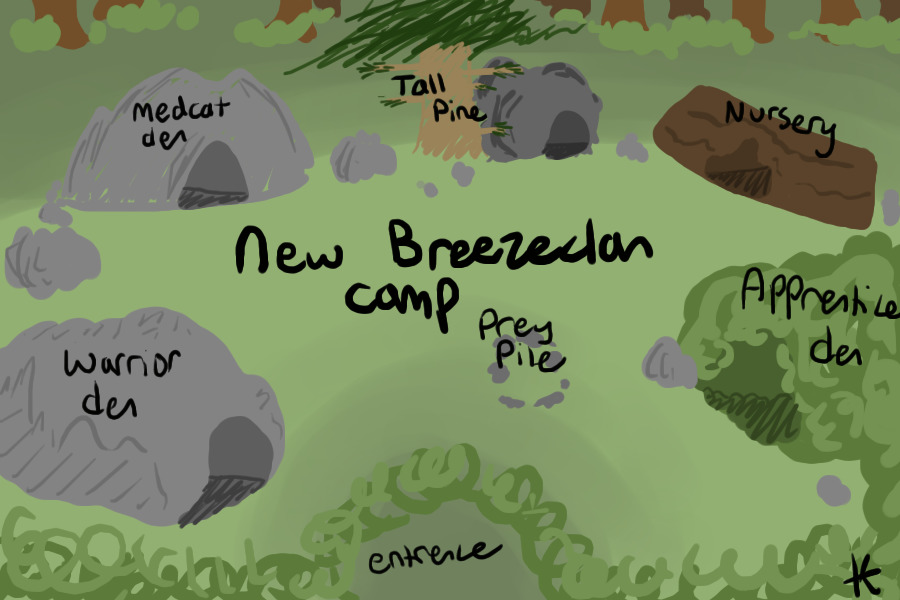 | Clan Camp |
Since Breezeclan's move, they territory has been quite different. Set up around a large pine tree, the cats of Breezeclan have gotten used to their more woodland type dens. Still, there is quite a bit of moorland for running around the camp. There is a hedge used as the entrance for the camp. The hedge turns and forms into a large bush, which the cats have turned into the apprentice den. The warriors den is a series of large boulders that have formed into a small cavern. The medicine cat den is a large rock that was carved out by twolegs, the insides are covered with moss and wooden stick shelves for storing herbs. The leaders den is two small rocks held together to make a cave. The inside flooring is pine needles with grass and moss on top. Finally, the nursery is a large log from a fallen tree from the back forest. The sides have been closed and sealed off with branches, brambles, and dried mud and clay. This den is the most secure, as the log is very thick and every Green Leaf the cats coat it with brambles. The insides of this den are soft with moss and bird feathers so kits and queens can rest peacefully.